Something I forgot to mention.....

For all you Christmas fans out there, whilst in previously said prominent shop in London, I came "stumbled" upon the Christmas section!!! Yes! Believe it or not, they open their Christmas section in the middle of August. So I have bought my first Christmas decoration for the year of 2008!!!! 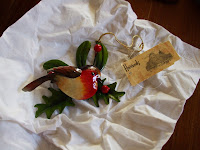 This week SW and I visited a place called Pendon, near Abingdon. There is a fabulous miniature railway and village setup in the village. We spent a couple of hours chatting and looking at the display. The scale is 4mm in 1 foot - so to say its tiny an understatement.

An Army Air Museum was also on the unwritten agenda. Very interesting. Amongst the various military paraphernalia was a little display that a gentleman called H.E Hervey had done between WW1 and WW2 while living in Australia. The pictures are of seeds, dried ferns and grasses. This would be similar to doing stump work with nature I guess. 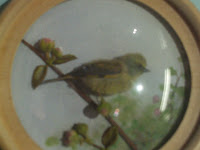 Then we headed off the Lymington and got way laid to the Isle of Wight!! Yes!!! Me on ANOTHER ferry - who would of thought??? Still haven't changed my mind about cruising though. 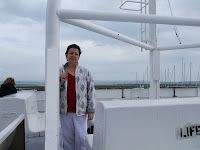 On the way to Lymington we had to pass through the New Forrest and Beaulieu Estate and came across a mother and her baby....sooooo cute! Was almost able to pat the baby donkey, but chose not to so as not to spook it. The horses and donkeys roam free in this area and there are plenty of them (horses that is - we only saw these two donkeys) and they have right of way around the place. 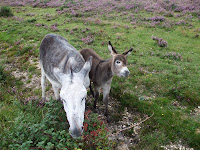 Have found a new calling, job-wise....Wing Walking :) After going to the Bournemouth Airshow and watching the spectacular flying and displays, we were entertained by the girls doing Wing Walking on the biplanes....only thing is that they might need a Hercules for me to do it as I have taking a liking for Tunnocks Tea Cakes.....yummmmmm....might end up the size of a bus by the time we finish our holiday here!!! Saw the last flying Spitfire from WW2 with a Lancaster bomber in a Battle of Britain Flypast, also some helicopters doing a display and a jet zooming around. SW spotted one of the funniest things we have seen while here on holiday. In the photo below you will see a little boat with a red flag on it...the other boats with people on board were watching the Airshow and this little fellow was going boat to boat selling ice-creams!!! We were in stitches!!! 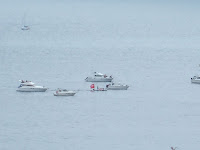 This picture is the view we have from our new house :)) And the second is of the back of our new abode! No honestly!!! We have been staying with some fabulous friends and have been here for several days, that we feel like part of the furniture now. 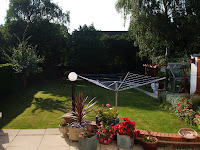 Sadly tomorrow we must leave Karen and Keith and move on to the next port of call...Hastings.
Posted by OzRose at 6:28 AM

sounds as if you are having a great time glad you got down to a decent part of the place the south !!:) good old Isle of Wright
Whitney seems ok but you never know ...still waters etc... what did you think of Calico Kates? we have been emailing each othe ras I brought Whitney a machine from there...one of the 99pounds Janomes...Nathans sister has had her baby a Boy called Elan...hebrew for tree quite apt seeing as he was born in a tent in the middle of their field!!...as for th emachine qulting wait till you get a close up!!! ok thats all the news for now off to work !!:(

How fabulous to get to see and do everything you are! Oh to dream...dream. Glad you are having such a wonderful trip. Can not wait to see the next group of pictures. Thanks for sharing.

Hi Rose, you seem to be having a great time here in the UK, enjoy your trip to Hastings...
I have given your blog an Award, please pop over to the Hovel to get it when you can...lol...Hugs Chrissy xx

Hi guys, Have been following your trip and it sounds like you're having a great time!! One more week and we will be off....... Have a great time in Hastings and keep an eye out for arrows and keep your heads low!! Look forward to catching up with you when we get back. Stay safe and take care, Love Nev, Deb & Simone xx