...since my last post! How terrible :(  Well, here I am again!  Today was the beginning of the Christmas Pageants in South Australia, and for those of you that don't know, we hold the biggest one in the world!  Speaking of Christmas, one of the ladies that goes to Thursday craft, entered her Christmas waistcoat into the local show and won a prize! Well done, Mary :) 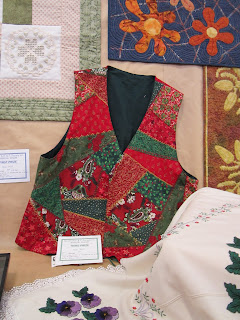 It has been quite a busy few months, that's my excuse and I am sticking to it!!!!  YWCA Encore Adelaide were successful in securing a decent grant for 2012-13, which has enabled us to be able to run several programs, so that's part of what I have been up to :)  Below is two lovely ladies, Marilyn on the left is a volunteer ambassador in SA for The Otis Foundation ( they provide retreats free of charge for people who have had breast cancer to go and have a holiday with family, friends or supporters) and Ruth, my colleague on the right :)  We were at the St Andrews Breast Cancer Luncheon which is held every year.  People (and I say people, because breast cancer is applicable to both men and women) who have had BC surgery at St Andrews get to come along for two years after their treatment and can invite a friend to come along.   There are guest speakers and a lovely lunch too! 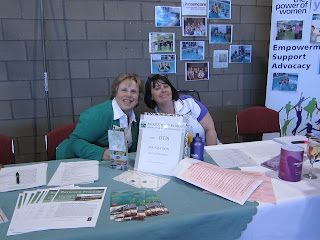 Please ignore the dates on the pics - camera was not set right!  So...then it was a bit of quilt therapy for me...I booked in to see Ricky Tims at the AMQ Festival :) :)  What a fab day we all had (well, I think we all did!) Exhausting, lots of woo hooing and light bulbs going on during the course of the day.  The venue was at the Adelaide Convention Centre and I have to say I was impressed - staff were great, food (gluten free!!!) was provided and it was EDIBLE!!!! and delicious :) 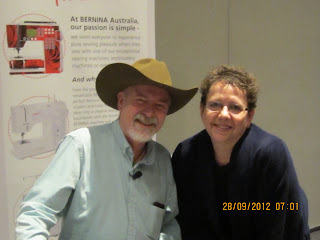 This is one of Ricky's quilts, unfortunately the picture does it no justice at all.  It is called Bohemian Rhapsody. 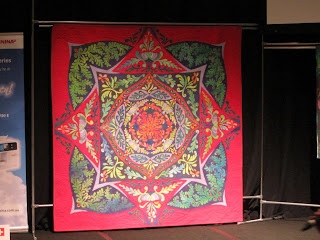 Here is one of my friends, Marilyn, with Ricky.  He was sooo nice, he signed every ones book and had a picture taken with all that wanted one! You don't get that very often. 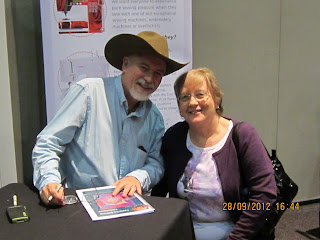 And just have to show you all again! This is my 1/12th Quilting studio... 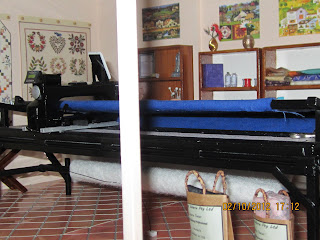 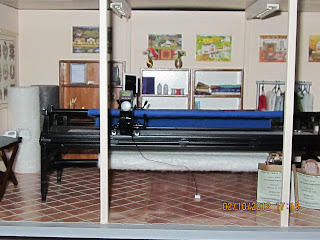 More R&R, this time up to the Lyndoch Lavender Farm with SW and the Fossils for a lovely morning tea.  We then headed up to Tanunda for lunch (ice cream really), had a mooch around and then headed back home.  Believe it or not that took the whole day up!  Was my birthday so it was nice to do nothing much. 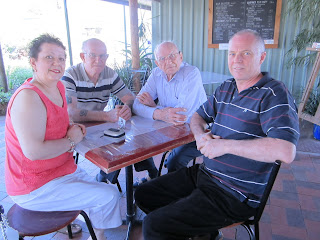 October was our middle great nieces 5th birthday, sadly I did not get a pic of her :( But this is one of the 8 new puppies in their household.  Soooo cute, but no! I am not getting one :) 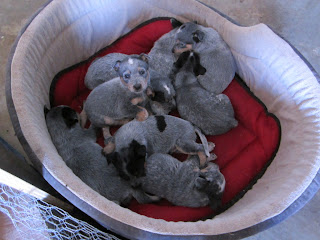 There is always a fugly pic somewhere, and this is mine for this post.  If anyone would like to purchase it (the light fitting that is) it is up for sale.  And NO, it does not belong to me, but to one of the Snobs & Slobs, it came with the house she bought. 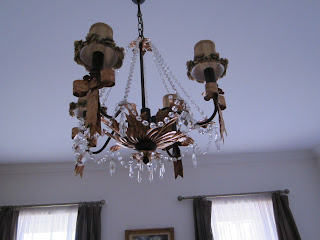 Last week, we had some lovely weather, so I was able to leave my studio door open while working and in flew this little butterfly!  It made a bee-line for the fake flowers and it took me a while to get it to go back out the door. 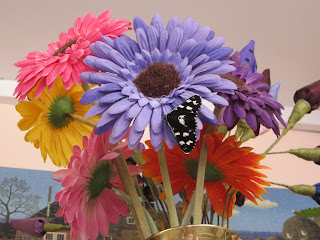 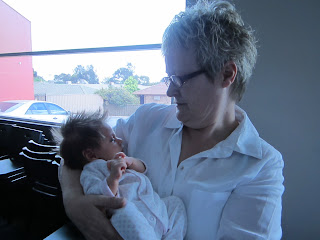 Moving right along, we are now in November so that meant it was Father-in-law Fossils 85th Birthday, so I thought I better make him a quilt :) Very easy one to do and I love the way they all turn out differently - "Disappearing Nine Patch".  He put it straight on the bed, so I guess he likes it. 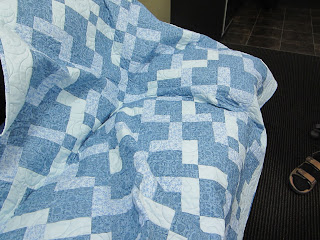 This is Tom with the great grand kids and grand nephews and nieces. 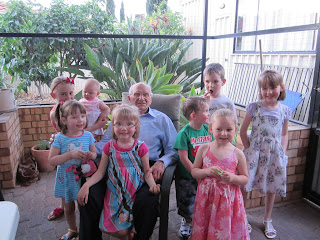 These are some of the lovely friends I have made through doing Encore.  We get together for dinner every 5-6 weeks and its always a laugh. 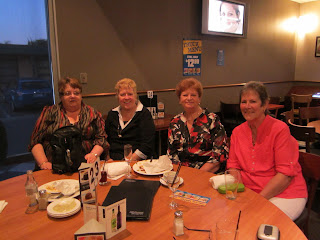 The Adelaide Quilt and Craft was on this weekend.  I had not been for a couple of years so was eager to go and see what was out there.  The Eggers had a lovely display - so here is a few of what they did this year. 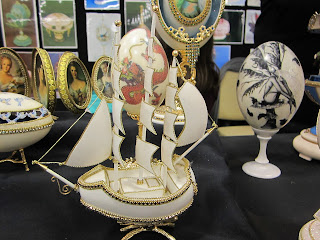 The quilt display was good, but this one caught our eyes (mine and Quilty Gals) cos its different.  It is a Dragons back with a tattoo of a lady who has a tattoo of a dragon :)  Congrats too to Tara and Lizzy for winning a prize with the Farmers Granddaughter quilt - just beautiful! 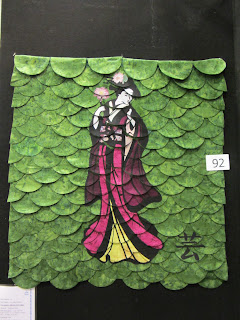 Well....that's about it for now folks, probably bored you enough at one time!  Till later, I better go and do some more work!

Thank you so much Val hon. Wow, you have had a busy two months, you're busy living your life - you haven't had any time left for blogging!
*hugs*
Tazzie
:-)

Nice recap of the past couple of months!

Has it really been that long since you posted ? Good grief. Time flies !
That little butterfly looks so cute on the pretend flowers. Im so glad you managed to get a snap of it. Moments like that are golden.

That light fitting would probably look alright with all the brass spray painted white . I just bought a chandelier for our dining room or I would have taken it and given that a crack...