Another week down the track....

We sadly had to leave our friends in Scotland, Ernie and Flo and had to head off down to Wales. Stayed at an amazing place called Woodlands Hall in Ruthvin. After booking in the hotel manager told us the room was haunted...wooohoo!!! Next morning we awoke to knocking coming from the little wardrobe, but couldn't find anyone in there :( 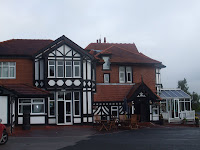 We then headed down to Llwyn-y-groes to see Quilty Gals future son-in-laws family. Had a great time meeting the family. Hubby now has a new nickname after spending time with the family. While sitting there in the afternoon, a baby squirrel was spotted in the drive way. So the Squirrel Whisperer (who will now be known as SW) took himself outside and took a pic. He later was able to stroke said creature and pick it up - have video to prove it!! And believe it or not I can actually say the name of where Quilty Gals daughter is going to live!!! How about that???? hehehehe And yes, I have been to Calico Kates quilt shop in Lampeter - fab!! 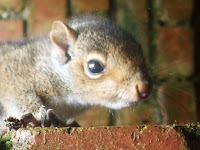 Then after a day or two it was off to the south of Wales to visit with some friends. Had a great time catching up there. Friends sister is Bat Lady of south Wales :)) Would apply for a job doing that if I lived here. Anyway, had a wonderful time there, then it was time to set off once again so we went Captain Jack hunting in Cardiff. Alas, they were filming Torchwood in the area (saw the site trailers and spoke to the security guard but no Captain Jack :( ) The pic below is of the SW on the spot where the team enter into the underground world of Torchwood. Dr Who was also on the days itinerary - not very exciting, sorry to say. 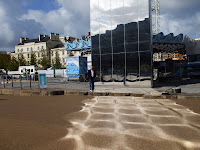 Then once again, we had to head off for our next stop. We arrived at our friends in Eastleigh. This is a picture of Karen receiving her surprise miniature house. 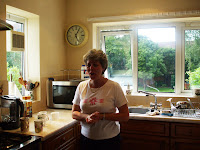 Since being here, we have managed to have a bit of a relaxing time. A trip up to London was of course on the cards. The Victoria and Albert Museum was the main item on the list, so not being savvy with how things work in London, we got to the main museum, only to find that what we really wanted was out at Bethnal Green! So back on the bus and out we headed. This is the V&A Museum of Childhood Memories. Well worth the visit. I had wanted to see the 13 dollhouses that are there. One of which is Queen Marys House as pictured below. The houses go back in time some 400 years, which is amazing to see. 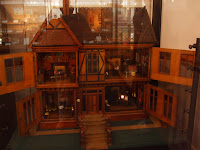 The silver ship is in the V&A Museum and of course if made of silver and is a few hundred years old. The notice said it was believed to be some sort of liquid pourer. The workmanship is second to none. 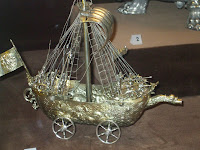 The picture below is cut paperwork dating back to 1707!!! It is about 14" square and is fabulous. There was just so much to see and photograph that I could fill up this blog with hundreds of pics, but that would just bore you to pieces. 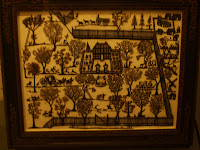 The last pic for this post is SW standing in a very prominent store in London next to one of the latest TVs - had to take a photo as it was a very large TV and the price was astronomical £27,000.00!!!!! 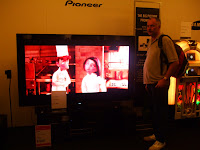 Sounds like you are having a great time! I love your pictures, it is so great to see other countries sites, special interests...all so beautiful. Continue to have a great time!

Thank you for the wonderful postcard! How sweet that you thought to send one while you are having such a great time and seeing so much. I was very touched! Continue to have a great time.