Well here we are a week down the track....

The past few days or so have been quite busy over here. Took a short trip to the Newcastle Quay Markets. This is held just near the Newcastle Bridge (I know it looks a bit like the Sydney Harbour Bridge, but we wont get involved with that debate :) ) 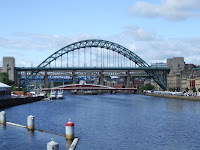 Have managed to catch up with some friends and relatives in my home town. Met a cousin that I haven't met before and his wife, which was nice. Being trying to sort out a bit of family history too while we were visiting, got some bits and pieces which have been good. Need to go back and chat some more at the end of the trip. 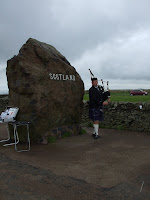 Headed off for Bonnie Scotland - there was a piper at the border (don't think he had anything on under the kilt, cos the wind blew up but I looked away!!!) Was freezing at this point - only 11oC in the car!! Along the way we stopped at Edinburgh Castle, too many tourists there....but managed to get a pic of Madonna. Was walking behind her up near the Royal Mile - she is soooo little!! 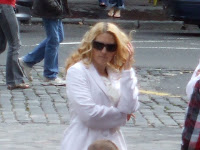 After the castle we headed north towards Falkirk to have a look at the 'wheel', got there too late to see it operate. But was interesting to see the real thing after having viewed it on the net. 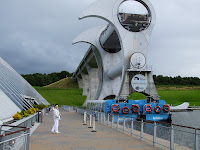 Our next stop was Culzean (said Cullaine) Castle. Fabulous day spent viewing the finery and gardens there. Might buy it if I can find a spare couple million dollars when I get home. The thistle was just one of many beautiful flowers in the Walled Garden. Saw my first Robin for the season too, but he flew off before I had time to take his pic. 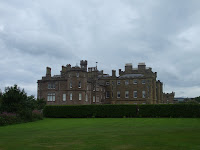 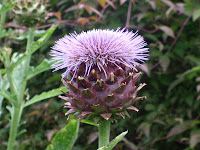 We then set off to stay with our friends Flo and Ernie in Stranraer. Super Dave made Flo a miniature house - here is the picture of the year. She couldn't believe her eyes as you can see. 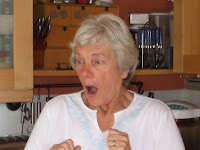 We have been all around the Stranraer area while here, up to the Galloway Forrest (more rain) and around the township. Believe it or not folks (for those that know me will not believe it) I have even been over to Ireland on a ferry!!!!! Here is the picture to prove it....even came back First Class...cant say that it has changed my mind about sea travel tho. 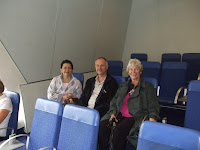 Not much stitching is getting done, only a bit of cross stitch now and then. Have decided that I quite like the old Gin and Tonic now (friends over here introduced me to them) so less stitching might get done!! LOL

Nearly dinner time so best sign off for now - don't hold your breath for the next installment, cos I don't know when it will be....

Glad you are enjoying yourself.
One of my claims to fame is that I welded some of the Falkirk Wheel. An engineering company I worked for did some of the work and the boys let me do some welding on it.

What a great trip you are having! Enjoy it! And I love those gin -n-tonics, too! It's a little hard to stitch after one or two!

Will be interesting to see how that cross stitch turns out after a few G&Ts....Glad you're enjoying your stay in the UK and fitting in some FH, shame about the weather though..So you did a trip to Ireland by ferry, not one of the best crossings, I remember when I went!!!!!....Enjoy the rest of your trip...Hugs Chrissy x

YOU....ON A BOAT...ON WATER...you are right I dont believe it no sharks obviously no seriously how much did they pay you.....glad to see you are having a good time say hi to Nathan for us when you get there...love & hugs
Claire
xxxxx

Guess what there is a patchwork shop in Lampeter Calico Kates maybe you should check it out when you are down there??

Hi Val.. Lovely toread all about your trip Thanks for the lovely memeories ..We to went to galloway forest loved it there.. Fancy seeing madonna... did you get her autogragh???the Photo of flo is just classic...I want what she got?????Where did you go in Ireland????Nice trip over isnt it it like a floating hotel..Looking forward to your next adventure.Love jean

Sounds like you are having a great time...enjoy those G&Ts.....there will be plenty of time to stitch when you get home....I am with you on sea travel....!! Not a fan at all!

lol - i seriously thought you were in sydney! good to hear you are having a great time.
l
x