A few weeks down the track....

..and I thought it was time to put a post on here! Thank you to all the lovely people in and out of Blogland that sent their kind thoughts to me and my family after the passing of my mum. I would like to share a little happening that occurred after mum passed away. On the day that we were going to get the flowers for the funeral (a friend is a florist, so said friend did a beautiful job!), my monthly quilting pattern arrived - this is like a magazine subscription, you never know what you might get. When I opened the packet, I found the pattern was a floral one, but the name of the pattern blew me away totally...."Florence"..... which was my mums name!!!! So make of it what you will!!! 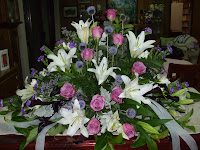 Anyway, here is my new project....the fabric is out of my mums stash....all shades of purple/lilac. My dad helped me cut out the paper for the hexagons and then he cut out ALL of the fabric for me!! Couldn't get him to sew it tho :( LOL 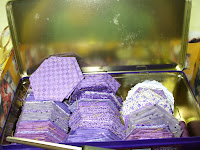 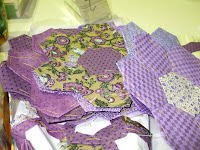 This is one of my brothers doing his impersonation of Gene Simmons of KISS fame - with a slice of jelly!!!! 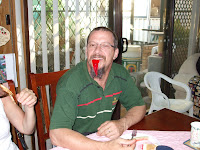 More food here yet again....my friends daughter had her friend come to visit Adelaide a few weeks ago from interstate... so we took them to Bracegirdles at Toorak Gardens for afternoon tea. We had a yummy lollie/chocolate fondue. I think we waddled out of there a little waddlier than we waddled in!!! 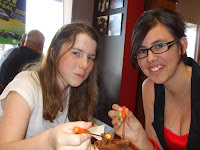 The SW's cousin had her 70th Birthday celebration in January, so I thought I would make her a Double Irish Chain quilt. Her mother was Irish and she loves greens and creams to thought this would be quite appropriate - I think the face tells how surprised she was at the gift. 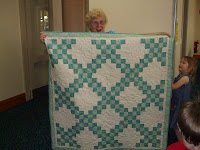 One of my long time friends had a new addition to her family in December, so she asked my dad to make one of his famous chairs for the new great grandson. We went looking for fabric but couldn't find anything that we thought suited the moment...then I remembered I had purchased some car fabric some time ago....as usual it had been put in the cupboard for 'later', so I dug it out and presto! we have a uniquely covered chair for a little boy. (His dad has an old Holden so it fitted the bill very well.) 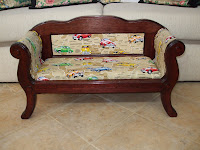 Last Saturday several of us quilters met up for a surprise lunch. We all had a lovely time catching up with each other (it has been several years since we had been together) We ate and chatted and promised to do it again but sooner the next time!! 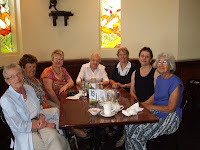 We have had a landing of a different kind in our kitchen!!! No...its not an alien spaceship - although I thought it was when my SW turned it on!!! Its one of those little ovens that cooks very quickly without much fuss or mess. Well, in the couple of weeks that I have had it, I have cooked nearly every night in it and it is wonderful!!! Very little heat, less cooking time and the flavour of the food stays in the food! Don't know why I didn't get one earlier!!!! 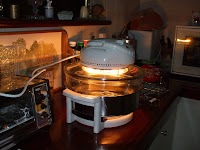 Well, tomorrow is Snobs and Slobs day again ...... seems like an eternity since the last one even though it was only two weeks ago! So I guess putting the world right will be on the agenda again!!! Cant wait.....

What a coincedence, my mum's name, who also recently passed away, was also Florence. Although my mum hated her name, apart from about a week when she was deliriously sick in hospital with double pneumonia and lots of morphine, then she said she hated the name everyone used for her, and she preferred Florence...lol Was funny when she recovered as the nurses were all calling her Florence and she got hoity toity about it and told them off for calling her it...lol Fond memories. Did your mum ever shorten her name to Flo? My mum hated that more than Florence. Hugs Naomi