Hello Bloggers!! It has been a while since I have managed to blog. As most of you will know by now, we have had a terrible beginning to the year in Australia. Flooding in Queensland with many properties destroyed and then the terrible bush fires in Victoria. Unfortunately many lives have been lost in the fires and many animals gone also. The worst part is that it was not a natural disaster :((( Out of this devastation a picture of love has touched nearly all our hearts. It is of fireman Bob and a wild koala now named Sam (for Samantha). Sam was caught in the fire and has had parts of her body badly burnt. The pic (which I am sure most of you have seen now, as Sam has been shown round the world) is of Bob giving her a drink.

Tis amazing to see that a completely wild animal knows when help is at hand is willing to accept the help. She was taken to a rescue home and is being cared for there and is just the cutest thing ever. Certainly pulled my heartstrings for sure!!
The summer for us in South Australia has also seen the hottest ever period since the powers that be started recording the weather here. So since 1887 we have had the hottest summer - over 45oC for several days. The nights weren't much better either which meant we had air conditioning on and then of course the electricity systems were overloaded and some of the areas had to endure blackouts for several hours. It is still rather warm now, but much more sustainable and livable temperatures! Thank goodness :)))
Some of you may know that I started a new career in December....am now training as a Dental Assistant (nurse) and have decided to go to school to get my certificate. So now I have 12 months of study ahead of me....goodness knows how that will go as the old brain hasn't had to work too hard for many years!!!!
Anyway, early in January I bought a pattern for a clown. QuiltyGal and I went to the Spotlight sale (I know, I know, we had vowed not to increase our stash!!) and bought some fabric for said item. Well, it has taken about 4 weeks to nearly finish as I decided to make 3 of them!!! Just got the faces and shoes to paint on them now. 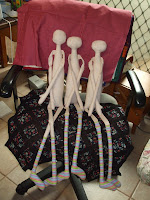 They started off looking like aliens from another world.....but have morphed rather well 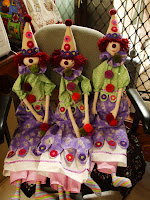 The pattern is County Keepsakes - "Bellatrix" by Annie Smith
Well, I guess that's about all for now people....till next time....

So glad to see your blog. I was worried about you and all the fires. Wild fires are always a concern in our area during the summer too, and always so much worse when not a "natural" fire. Take care, and know our hearts and prayers are with you and your fellow countrymen.

Glad you're safe. Keep cool and good luck with your return to school.

So good to see you back, the fires are so devasting to see from this side of the ditch, my heart goes out to everyone for all that has been lost. Your wee clowns are very cute. Hugs Jx

'bout time you got back on here ...too much facebook thats your trouble...games games games.....hehehe.....cant make quilting this friday as I have to work...I KNOW HOW RUDE !!! disapproval has been shown...but there is no one else....

I am glad to hear that your studies are going well. Your clowns have turned out well. Hope you have a good weekend.