but where did it go??? We had a little thunder and a bit of lightening and then some rather large raindrops....and now a cricket chirping in the window!!!!!!!!This year at our craft group we decided (or I decided!) that we would do a Mystery Quilt. Some of the ladies are now getting near the completion of the project top. So here is Ella with her purple top. Lorraine with her green top. 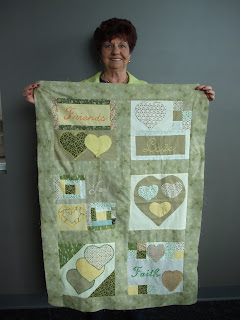 Una's almost completed quilt - Una added three blocks of her own to make it a larger quilt. 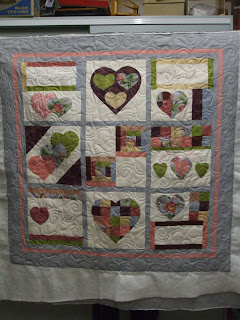 One of the Snobs put together her 'scraps' and came up with this lovely quilt top. Lorraine said it just grew and grew and didn't realise how big it was till she finished sewing it all together. I think it is absolutely beautiful - as are all Lorraine's quilts! 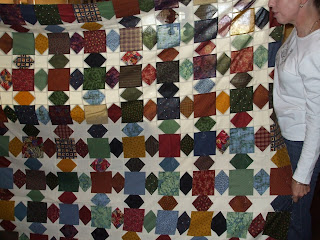 In a previous post, I uploaded some pics of two quilts, well now they are finished!! Yeh!!!! The first is called "Sew Many Hearts", this is going off to our local hospital cancer unit for raffling next week along with a small settee that my Dad has made. 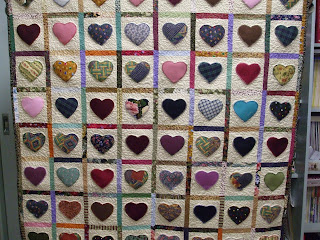 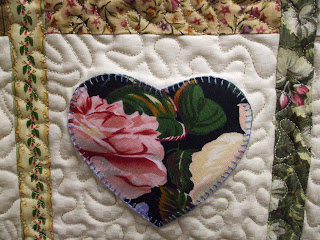 The second is the hexagon quilt made with my Mums fabric - 'Florence's Floral Fancy'. I quilted it with the pattern called Florence, which is a flower pattern and am thrilled with the finished product. My dad cut the hexagon papers and fabric for me so it was a joint effort. Tried to get him to tack some of the hexagons, but at the end of a nights work and only having 5 hexagons 'tacked' (speaking loosely here) he decided that it was a good job he was not on piece work and getting paid, so he gave it up as a bad joke. Anyway, the quilt will go to him once I have done a couple of show and tells! 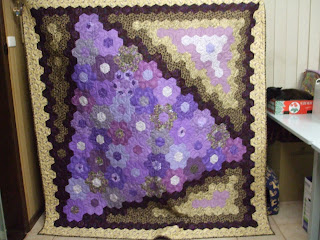 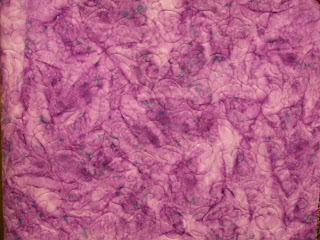 I am hoping to be able to get a bit more sewing done this week - got the yukky stuff to do next - taking up hems on men's pants and fixing some other bits and pieces up :(((

So till later, stay warm!

Email ThisBlogThis!Share to TwitterShare to FacebookShare to Pinterest
Labels: Quilts

the rain stayed around a bit longer here in the Barossa...it was quite heavy...good for the garden - it has been very dry! Lovely quilt show!