...there was a small urge to have a blue rinse and perm done! Also the thought of purchasing a frock while I was in London...but thought I might leave that for my 60th!! LOL

Anyway, the birthday week was spent in London. Lots of sightseeing and walking and dodging lots of other sightseers in the process! Our first stop was the British Museum. 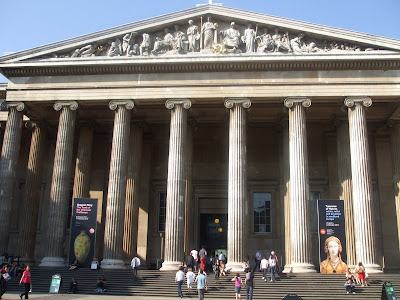 Lots of things to look at here and lots of pics were taken, but will not bore you with too many! As in previous places we have visited, there were miniatures of buildings etc to be seen. Here is a miniature of the Parthenon as it would have been when completed in 432BC. 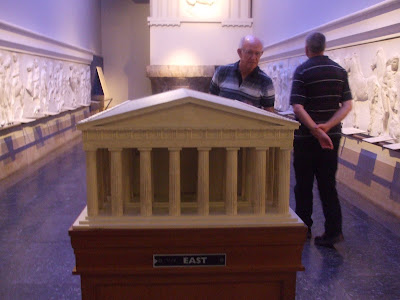 Dad measuring up with one of the statues in the museum. 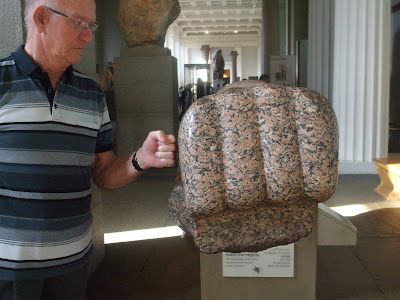 The Roman section had some fab mosaics on the walls. 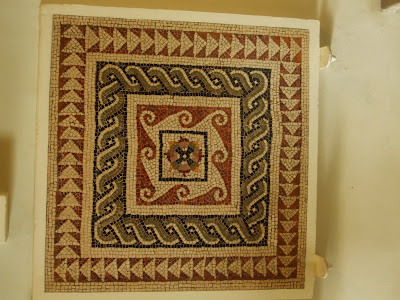 Night time fell and we strolled around London for a while, the Queens Theatre have this lovely rather large show on their roof advertising a long running show there. 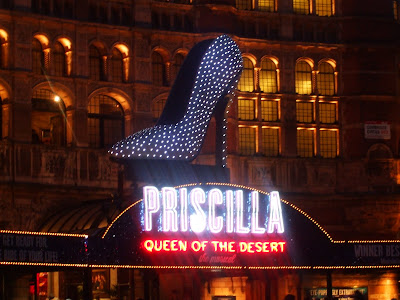 Next day it was Madam Tussauds. Packed with visitors was an understatement. I have to say that I thought Morgan Freeman was one of the best on show. 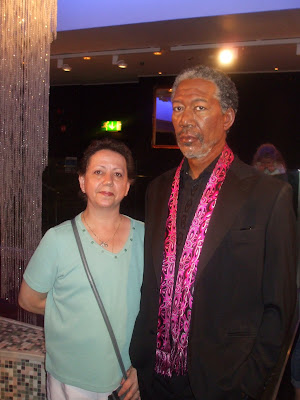 Then it was off to Ripleys Believe it or Not. Some very strange things here to be seen. Here is one of the shrunken heads that were on show....and yes it is real! 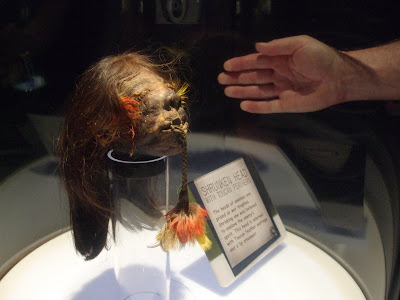 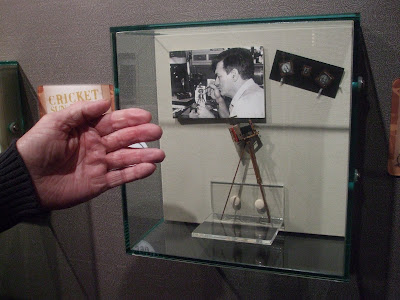 After lunch Dad and Dave went on the London Eye. However, due to my lack of interest in heights, I had this view! LOL The hot chocolate in the cafe near was delightful though :) 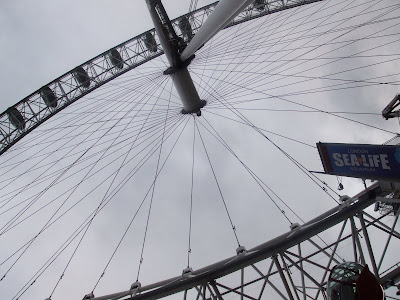 We took a cruise up the River Thames. Very interesting commentary from our steward on board the boat. There is lots to look at along the Thames, including Dame Helen Mirrens house, Michael Crawfords house (they live opposite each other), David Bowies house, the 'boat' owned by the chap who owns Tottenham Hotspurs Footy team - it is said to be worth £1million per metre!!!! This next pic though is of the oldest pub in London, 'The Prospect of Whitby'. Quite quaint against all the high rise apartments and development that is going on along the Thames. 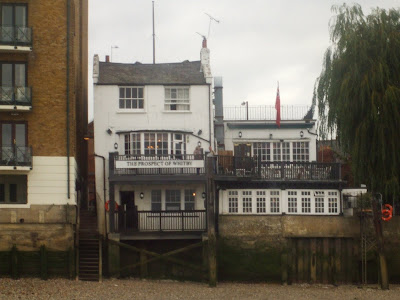 This is the OXO building and is a very expensive place to dine out so I am told - cousin and wife went there and it cost them £170 for two for lunch!!!! 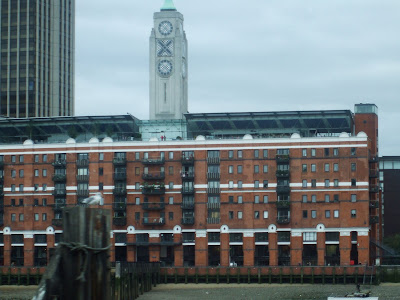 At the end of the cruise up, we got off at Greenwich and had a walk around the area. We stopped to watch the 12.55pm clock go off - this is where Greenwich Mean Time is marked. The ball on the 'T' spire is at the bottom of the pole and works it way up till it gets to the top which is then 1pm and then falls back down. 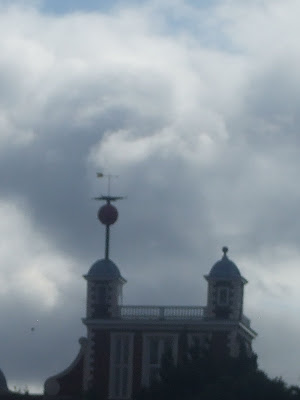 We walked through the Queens House - and of course there was a miniature of that to be shown. 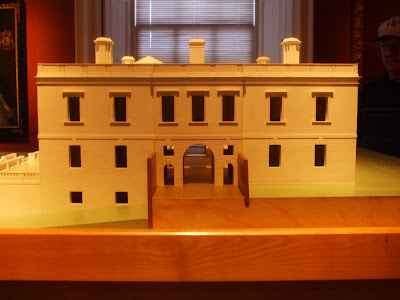 The staircase inside was magnificent. It houses art work on the walls and was quite interesting to walk around. 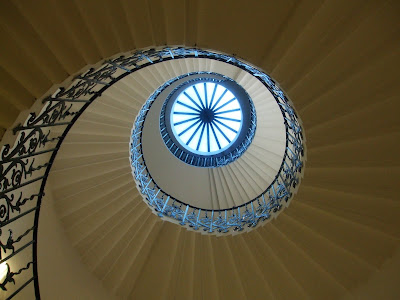 This picture was just fabulous!!! 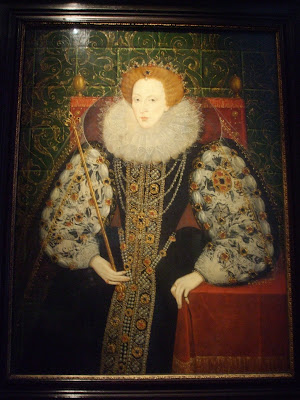 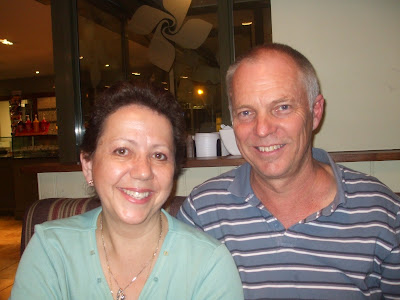 The Imperial War Museum was on the agenda. Very good, but too much to see!! 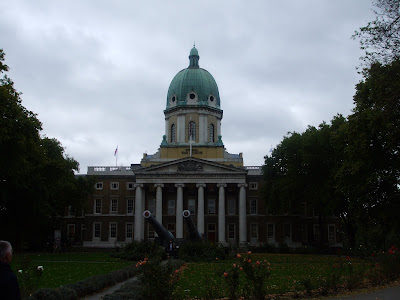 The Science Musuem was great too, but once again, way too much to look at. This clock was very different, don't know if I would like one in the lounge but was worth a picture. 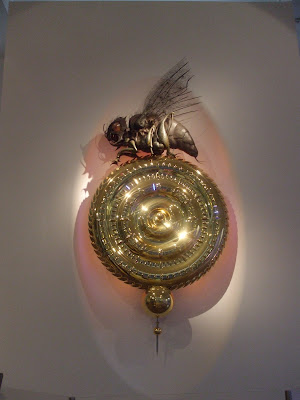 There are many sections to the Science Museum, and of course I took many pictures, but thought this one was one to share. It is a miniature room box of someone giving birth in the Victorian era ----I know, I am a sick puppy!!! 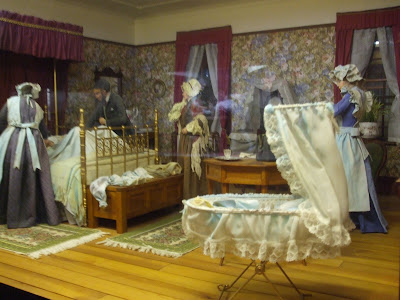 Harrods was next!!! Who could resist???? This is a resin model that was for sale of the Hogwarts Castle. 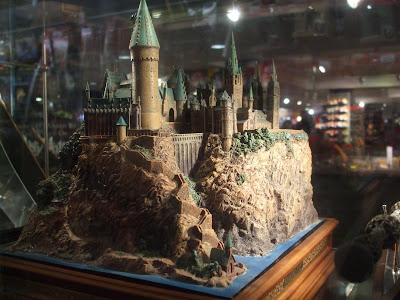 The Christmas section in Harrods opens rather early in August and looked magnificent as always. 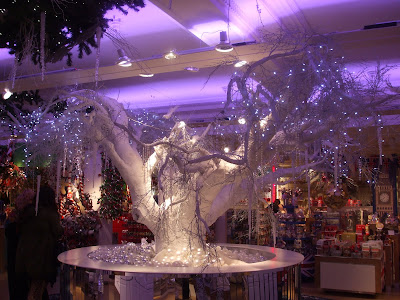 The last morning in London we walked around the park near our hotel, and guess what??? There was this cute little grey squirrel waiting to have his pic taken! LOL 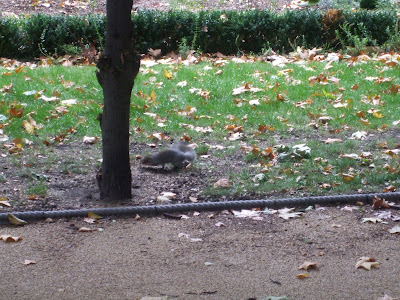 On the way to catch the train home we met up at Libertys with a friend for lunch. Very nice little store with heaps of atmosphere...and the lunch was great too! 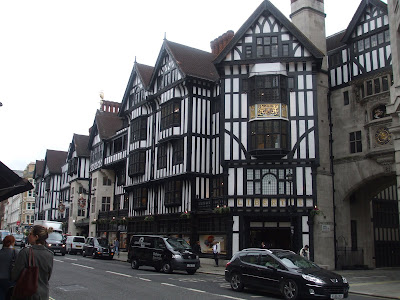 This is Tinks, David and Dad. 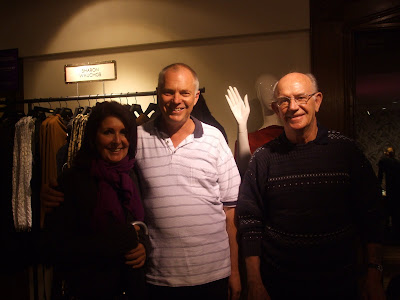 Well, back to the home town now! It was Davids Auntie Eleanors birthday while we were away so thought it would be nice to celebrate with her when we got back. Her choice of eating was one of the award winning fish and chip shops in South Shields - 'Colemans'. I have to say it was award winning food! Well, here we are at the end of another posting. So till next time, happy reading!
Posted by OzRose at 12:46 AM

Oh my gosh I am tired just from reading all that. You must have been exhausted.
I would love to have that Bee Clock. Morgan Freeman does look very real doesn't he.

Happy 50th V. Looks like you're having a wonderful time.

Looks like a great birthday celebration Val...here's to many more!

Happy birthday!!! Thanks for the lovely views. So jealous that you went inside that glorious building and visited Liberty of London!!!